I learnt surgery in an era which was very different from the time my father learnt the same craft. The first day I entered the operating rooms of Madras Medical College, multiple screens of the laparoscopy unit stared into me. The distinct hum of the harmonic scalpel filled the entire operating room. The oldest medical college in Asia was not a relic. The young men and women in that room were embracing modern tech at a rate which a generation of surgeons before them could have never imagined.

Surgery as we knew it had changed in the last 20 years. Surgeons in the west in the early 1990s faced a choice – learn laparoscopy or stop operating. Many old time legends who were revered by legions of surgeons and students saw laparoscopy as something which could never replace open abdominal surgery. They soon became obsolete. Readers may think that the words are harsh but they do reflect the truth. This situation repeated itself in the Indian sub-continent just a few years later.

“Nothing can beat the feel of your hands in the pelvis” “Bigger surgeons make bigger incisions”. Some of these phrases still reverberate in ORs today mouthed by an older male surgeon who never understands how a long instrument could replace his fingers. They often strut around in the old charity hospitals of India whose ORs they once dominated. As they move from OR to OR the young surgeons(many of them women) wish them with a hurried sweetness. They know him , they have read his books. They also know that he is no more relevant because he refused to learn something new when the time was there. And then there were a few who weren’t so young when laparoscopy was sneaking its way in but decided that there was no way they were going to be left behind. India had its share of masters – Palanivelu, Bhatia and Chowbey who changed the way entire generations of surgeons looked at laparoscopy. I remember my father when I was a kid, travelling a thousand kilometers just to see one of these men operate. I see the same men operate now , on the screens of my iPad.

The idea of robot doing surgery started not long after laparoscopy captured our imagination. In. 1990. Dr Frederic Moll, a tech visionary and a surgery residency drop-out conceptualised the idea of a robot which could help a surgeon operate. The seeds of the Da Vinci were sown.The FDA approval for the robotic system in surgery in 2000 was a game-changer. The surgeon got the wrist ‘back’ and it all seemed good. The new millennium seemed to usher in the robotics era. Pundits predicted the end of laparoscopy. But the initial excitement died down. Urology adapted remarkably well to the system. Complex prostate surgeries and hysterectomies were well served by the robots. But the hype was short lived. Da Vinci proved to be a major white elephant. There are about 4000 Da Vinci units in the world, half of them in the United States. The Da Vinci never was able to penetrate the vast Asian market as it envisaged. Most installations in India never made a profit. The initial cost was upward of 2 million dollars and the annual charges were prohibitive. Insurance was a major hassle in most parts of the world. Convincing patients to shell out a significant hunk of money was almost impossible. The entire system was fraught with major logistics and financial issues. The Da Vinci which was a work of art, could never be utilised to its full potential. Two decades after the first FDA approval, robotics barely made a dent in the minimal access world.

The initial hype behind robotics pushed many leading tech majors to invest in robotics. Johnson & Johnson’s acquisition of robotics startup Aurius Health in a $ 3.4 billion deal and and the much talked about Medtronic robotics team have made surgical robotics a hot area. CMR Surgical is a new entrant but has managed to launch their product relatively fast. Originally known as Cambridge Medical Robotics, CMR Surgical has raised $ 240 million in its latest round of funding in September 2019. Sources in the industry have revealed that CMR is looking to expand heavily in India and Middle East with at least 25 MoUs signed within 5 months of launch of their latest Versius robot. One of the Versius systems installed in Pune,India has already completed 100 robotically done cancer surgeries.

Why do I believe that Versius by CMR Surgical will usher a new age in robotic surgery?

I had an opportunity to play with one of their systems in the Middle East recently. Let me warn you that I haven’t operated on a Da Vinci before but have played simulation on a Da Vinci in a dry lab, a couple of times each lasting a few hours. The Versius unit I handled was preceded by a boring lecture on how good the Versius is. Well, I made a major mistake of underestimating it. The Versius is an absolute beauty. We started with the simulation exercises. The Versius unit comes with the simulation system at no extra cost unlike the Da Vinci units. The exercises were pretty standard involving a lot of cutting, stitching and burning. So how does the system compare to the Da Vinci?

There is need to haunch or bend excessively while operating like you need to do in the Da Vinci system. Simple 3D glasses enable viewing at a comfortable angle. There is also an arm rest which allows you to operate at ease. But the Versius is brilliant in more ways than one. Evolution allocated a greater part of our brain to our fingers than our toes. The makers of Versius at Cambridge have evidently thought about it because the diathermy controls are at your fingers not at your feet. It would be heaven-sent to a subset of paraplegic surgeons who desire to operate. The gameplay(to use game lingo) is as good as the Da Vinci but there is a lot of work to be done on improving the haptic feedback. I didn’t have much play time on real tissue so I hope to update my review soon after I get more hands on live tissue. 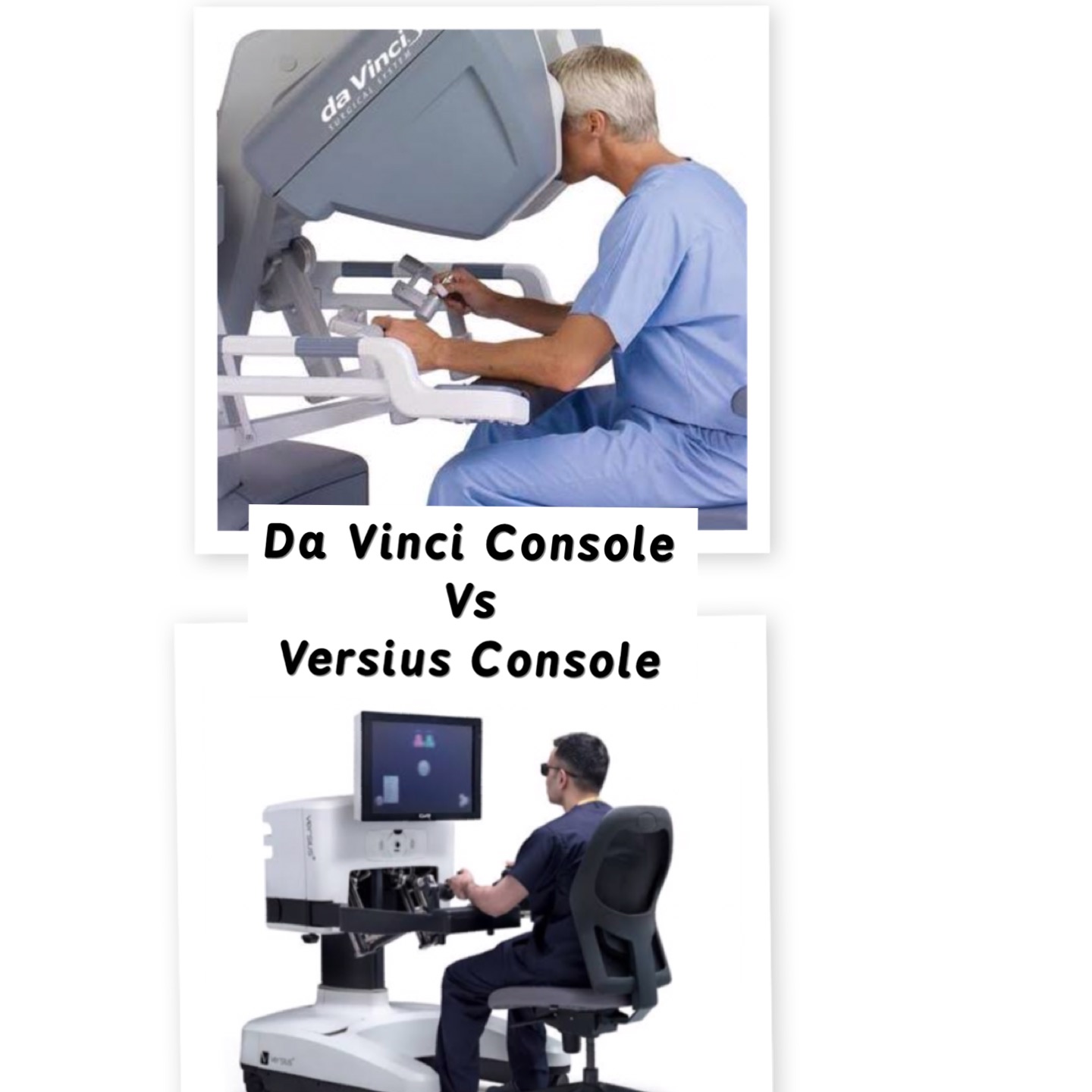 Where I think the Versius scores the biggest is its portability and ease of movement. The entire system can be moved from one room to another with minimal effort. No dedicated OR is necessary, making logistics easier for smaller hospitals in India. It will also useful for the legendary travelling surgeons (quite unique to the subcontinent) who load a decade old Maruti Omni with their laparoscopy sets and roll about the district removing uteruses and gall bladders at request. Too far fetched? I don’t think so considering that India looks like the biggest market for Versius right now. Docking the arms of the Da Vinci was always a major struggle and sometimes took up a lot more of precious operating time than expected. You simply don’t need to dock anything on the Versius. The arms are standalone sleek units whose placement is quite akin to the laparoscopy port positions. Versius doesn’t have any advanced energy devices as of now but we hear that it is in the pipeline. 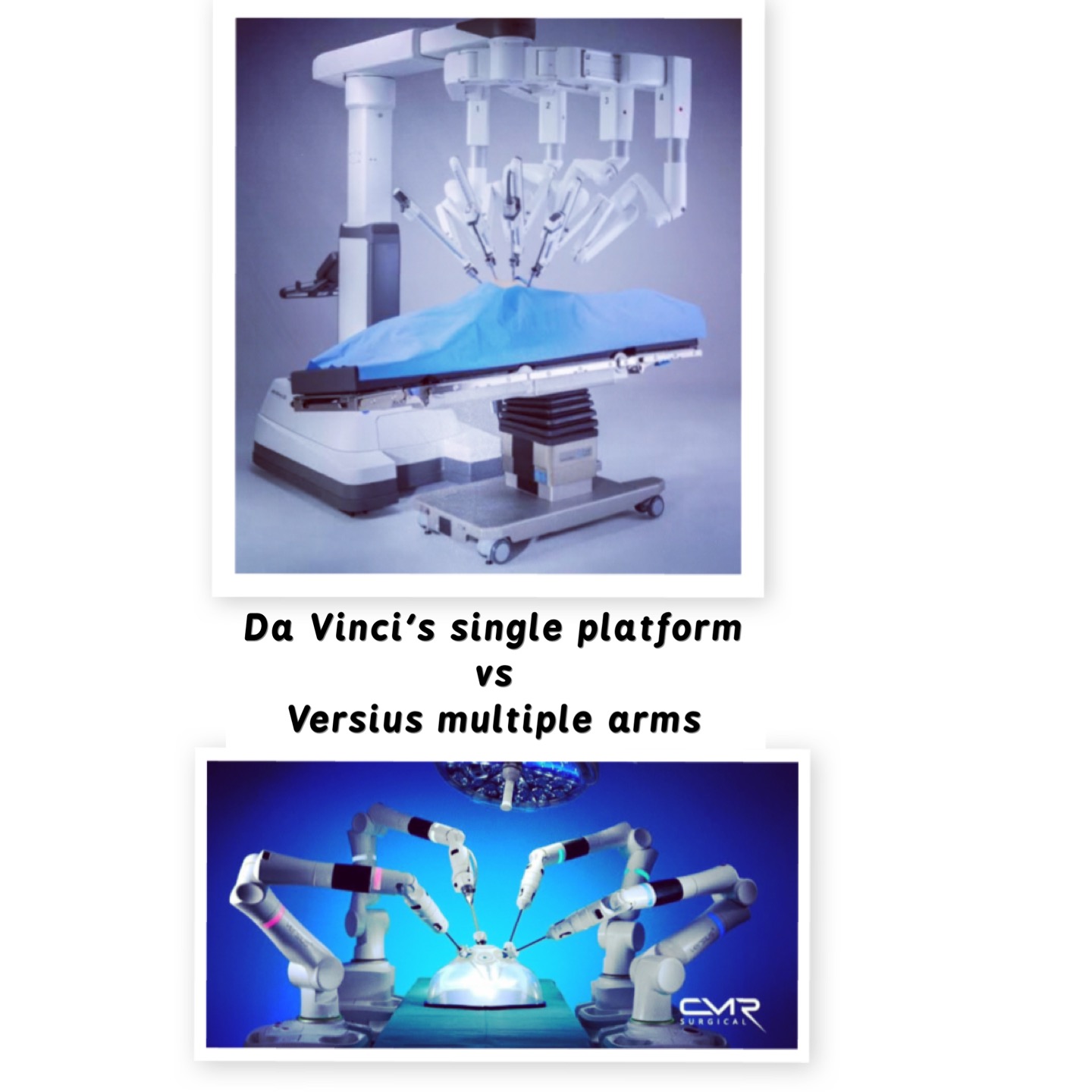 I am not going to comment much on the costs but it definitely is way cheaper than the Da Vinci. Major changes in the Asian healthcare scenario have always been driven by the private healthcare players and cost has been the biggest roadblock for the Da Vinci. Our psyche wouldn’t allow us to use something more expensive when we have something cheaper that works as good. We are looking at a winner here in terms of cost.

The final verdict: Versius is sleeker, easier on the pocket and looks as good as the Da Vinci with regards to handling. Does Da Vinci have anything to fear? Oh yeah a lot. Da Vinci is simply too too expensive for this part of the world. Will it replace laparoscopy? I have a feeling it will. We are staring at a revolution in robotic surgery here simply because the costs are low for a very high end product. Time will tell how good it is in real operating theatres but I definitely am going to bet on this machine from Cambridge.

Vinayak Rengan is a Chennai based surgeon and entrepreneur who is the founder of Surgtest – a surgical education platform that is launching a surgery learning app later this year. He is the founder-editor of www.thestonebench.com where he writes on science, public health and sociology-political issues.